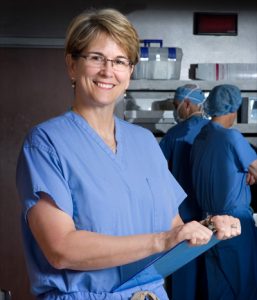 I’m Barbara Bergin, retired orthopedic surgeon from Austin, Texas. I’m not originally from these parts though. I was born in the Bronx! That surprises everyone who knows me because I have a pretty thick Texas accent, which I developed sometime after becoming a cowgirl. It’s the horses. But the New York accent also got tempered a little during the time I spent in Kansas City. As all of us who were not born in Texas say,” I got here as fast as I could.” My parents moved to Houston when I was in high school.

It took a little longer to get to Austin. I moved here with my husband and my daughter in 1986. I did my residency with a couple of guys who were moving here come hell or high water, both having been die-hard Longhorns. My parents had moved to Austin while I was off doing 13 years of college, medical school and residency. Being a mama’s girl, I wanted to be with my folks, and so we took the opportunity to come to Austin. I had my son in 1989, so he gets to say something very few people around here say these days, “I was born and raised in Austin, Texas.” Both of my kids are now die-hard Longhorns and I would never have predicted that, having gone to Texas Tech University for my undergraduate, medical school and residency training. It always amazes me that I didn’t end up living in Lubbock, Texas. I dig that place too.

We started Texas Orthopedics, Sports & Rehabilitation Associates in 1986, and now there are over 35 of us, and we’re now part of a statewide orthopedic group called OrthoLoneStar! Austin is the best place to live, practice medicine and raise kids. It’s a pretty good place to ride horses, make music and write books too. I’m glad I ended up here.

I’m still in a creative spell that started back in 2004, when I wrote my first novel, Endings (published in 2007, Sunstone Press). I’ve got a couple of other fiction works in progress, and a non-fiction book, Sit Like A Man. I love to play my guitar, and write old-timey bluegrass tunes. You might occasionally see me sneak out to play them at some of the open mic venues around town. There are lots of them in Austin, sometimes known as the “free music capital of Texas.” I didn’t quit my day job for the life of a musician though! Had to get old for that. I retired on July 1, 2022, 36 years to the day after starting Texas Orthopedics!

As a public speaker for audiences ranging from community groups to academia to medical professionals, I draw from over 30 years of experience and couple this with my love of teaching, to help educate, inspire and motivate audiences. I enjoy speaking on topics ranging from health subjects, like my S.L.A.M. ™ initiative, to female empowerment by instilling confidence in young women. Along with my other, and only female orthopedic partner, Dr. Kelly Cline, I teach a sports medicine class at the Ann Richards School for Young Women Leaders in Austin.

Welcome to drbarbarabergin.com. I hope you’ll enjoy my posts. My goal was to prevent disability and injury in 100,000 people before I retired. And I want to keep on helping.  I hope you’ll thank me someday.