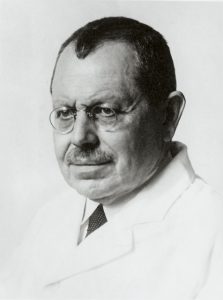 De Quervain’s syndrome describes a condition in which two tendons on the thumb side of the wrist get damaged and inflamed. No one’s really sure exactly why this happens. Maybe it’s because they rub against the prominent bump on the end of the wrist, or maybe the sheath or tube in which they travel gets too tight for the inflamed or damaged tendons. Suffice it to say that it’s another one of those adult repetitive strain conditions I’ve written about so many times. I’ve never seen it in anyone under the age of twenty-five…maybe thirty, but I got it when I was thirty-one. It’s seen more often in women, particularly women who have just had a baby. That’s when I got it. Lifting babies in and out of cribs and chairs is at least partially responsible, but I’m pretty sure my husband lifted my daughter in and out of cribs and chairs just as much as I did, and he didn’t get it. But two thirds of the people I’ve seen with de Quervain’s syndrome are older and not recently pregnant. I can probably count on less than half of one hand, the number of men on whom I have operated for this disease. So what I’m telling you is that this is just a frustrating condition to get because you haven’t done anything to ask for it…like you’re not doing squats or riding motorcycles or skydiving, or playing football…activities in which you are just asking for it…whatever “it” might be. It’s usually something for which you have to see me. But you usually end up seeing me for de Quervain’s syndrome anyway.

Let’s try another test. Grasp your thumb within your fist, like if you’re trying to hide your thumb inside your fist. Now squeeze your fist tight. Oh yeah. Did that hurt? If not, then just take that fist, with the hidden thumb in it and point it downward, away from your face, like the motion you would make if you had a fishing pole in your hand and you were testing to see if you’d caught something. Ouch. If that hurts, then you’ve got de Quervain’s syndrome. 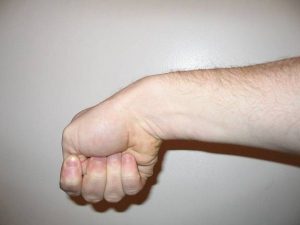 Hope you’ve caught this in its early stages because in my experience; both personal and professional, if you’ve had it for a long time, it’s not likely to get well with standard conservative treatments. But it’s always worth a try.

Start by using my general principle of treating any repetitive strain disorder; don’t do the things that hurt. People often think they can work through these problems, but that almost never works. Maybe it works after a couple of years but most of us don’t want to wait around for that. So just stop doing the things that hurt.

Of course that’s always easier said than done. And with this little sketchy condition, you can go days without hurting it and then just when you think you’re on the way to wellness, you grab a doorknob and it drops you to your knees. Use your other hand for a while if need be.

Sometimes it helps to use a brace, more for a reminder than an actual immobilizer. If you stay in a brace too much, it will kill you to take it off because your tendons will get used to staying in one position and they actually get a little stiff. As soon as you stop wearing the brace there is almost always immediate pain. So use the brace intermittently. Maybe you can predict times in which you will be more likely to strain these tendons. That’s when you use the brace.

Go see your primary care doc. Get prescription NSAIDS or a short course of prednisone (a Medrol Dosepak). That might work. Have some PT. Maybe that will help.

Go see your favorite orthopod and maybe get a shot. Probably got a less than a 50% chance of curing this…and it hurts a little.

So after a year of doing all of this, including the painful and useless shot, I had surgery and was well the next day. If I ever have it on the other hand, I’ll try the steroids and I’ll try to rest it for a while…and then I’ll have the surgery.