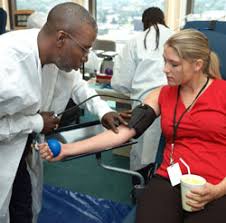 Why can’t I visualize my kids, or my husband, who have absolutely no fear of needles? They can even watch the needle go in! When my kids were little I used to put my hands over their eyes or force them to look the other way…for my own benefit. They could have cared less. Once they were old enough to understand what a shot was, they never cried. And they watched while they were getting the shot. Frankly, why wouldn’t they?  Someone is sticking something…a chemical…into their body. Or someone is taking the precious life fluid…blood…out of your body. Why wouldn’t you want to watch?

Not me. I have to sit in just the right position. I have to beat my arm to a bruised pulp. I have to have the nurse tighten up the tourniquet until no blood is passing into my arm and it gets numb. It has to be just the right vein…because after all, there is only one that puffs up just the right way. I squeeze that little ball until the muscles in my hand are burning. And then…and here’s what really works…just FYI, in case you want to try it, I put my fingers on my eyeballs and squish them until little multi-colored specks of light are flickering around in my head. The eyeballs are hurting so much that it takes the focus off the shot, which is usually done by then. And I feel like a total idiot because it didn’t hurt that much after all.

So this was my life with shots. And unfortunately you have to have one every once in awhile.

Several years ago, I was going to have to go through a series of lab tests and exams in the space of a couple of days. I knew I was going to have to have four shots; two IVs and two lab sticks. I was in a state of near hysteria. And then I made a decision; to pretend that I was the person who was not afraid of shots.

So I went to the lab for my first test. I usually start looking for my best vein ahead of time so I can pick the chair I want to sit in, so the phlebotomist can get to that “good” vein. And I usually advise the phlebotomist that I am the world’s worst shot getter, and so she best be ready for that and she should try to do her best job. Well of course that really helps.

But that time I walked into the cold little room with a different swagger. The swagger of one who isn’t afraid of shots. There is a difference, you know. And just so you’ll know, it’s a little bit of a John Wayne thing. That guy never worried about a shot. I garronetee.  Anyway,  I allowed the phlebotomist to seat me where her equipment was already conveniently arranged. I didn’t say a word about my veins. I just stuck my arm out there. I pretended to wait calmly until she put the tourniquet on and didn’t make her tighten it up extra. I waited until she asked me to squeeze my fist and I stopped after a few squeezes. She found the vein and wiped my arm with the alcohol.

NO I DIDN’T LOOK! I wasn’t going that far.

Everything was fine and even though I hated getting the shot, I didn’t have all the anxiety, simply because I hadn’t generated it.

The next day I had to go do the test with the IV. I walked in with the swagger.  I had a little bruise on my left arm from the lab stick. The nurse had the IV stuff set up on the left side of the chair and when she saw I had a little bruise, she asked if I wanted her to put the IV in on the other side. I said with nonchalance, “no,” this side is fine. And I went through the same process. Again, pretending to be at ease with the whole process.

I had another lab stick and another IV over the next few days, repeating the same act; the person who is not afraid. And with the same results; relatively little anxiety.

I have many patients who are just like I was, and I have talked many of them through their fears by telling them of my personal experience. It has helped in almost every case! And as we go through life, we get more and more likely to require a shot or two. So I blog about this today in hopes that some of you might become the people who are not afraid of shots.

This technique of pretending to be something one is not, can be effective in other circumstances. Think about it!