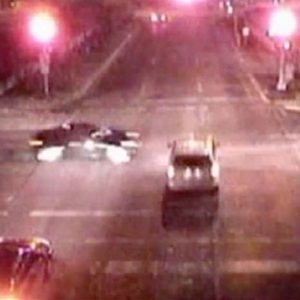 I’m seeing the evolution of a R.E.S.P.E.C.T. series. Again, another mundane aspect of our daily life. The lowly intersection. We pass semi-consciously through many every day and we pass through them safely. After all, they were developed for our safety. But it doesn’t always work that way. Sadly, the dead remind us of how fortunate we are to be alive, and then make us think of the things we can do to improve the potential for long life. Just last week two people were killed at an Austin intersection, reminding me of all the patients I have seen who have been injured under similar circumstances.

Of historical interest is that the first intersection was constructed in 1868 in London. And the first intersection fatality occurred when the gas lines leading to the lanterns exploded, killing the police officer in charge of operating the lights! Perhaps it was a foreshadowing of things to come, as intersection fatalities rank high in the causes of vehicular deaths, their numbers approaching 10,000 per year! And this in the crosshairs of something developed for our safety!

Here’s the crux of the matter. When I see patients in the ER who have sustained injuries at intersections, it is most always the result of someone running a red light. Certainly the greatest impact occurs when someone comes across a recently changed green light at full or nearly full speed, just as someone else is running a recently changed red light. Death waits here, spending most of the day in frustration, watching mild fender benders and sideswipes. But every now and again the combination of impatience and complacence brings home his due.

Many who run red lights are bordering on criminal behavior, and though they usually don’t pay with time in jail, they most certainly pay in fines and settlements, never mind the grief they surely suffer in the knowledge that they have put an end to someone’s life or damaged someone’s limb. Often they have been drinking. Many of these accidents occur in the wee hours of the morning when the only ones out there driving are the drunks and the orthopedic surgeons going in to tend to them and their victims in the ER.

But those of us who are accidentally in the wrong place at the wrong time, though we are not responsible, we may be guilty of trust and obliviousness. Never cross an actively changing intersection without pausing to look for red light runners. They are out there. And they will most certainly hit you.

So please respect the intersection!