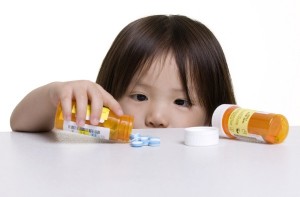 Before I say anything about kids and pills, I have to preface it by saying that for adults and pills, whatever I say goes double.

Steroids are…well…steroids. They’re also commonly known as cortisone, corticosteroids and prednisone. The most common one used by orthopedic surgeons is methylprednisolone, often prescribed in the form of a Medrol Dosepak, which is a tapering dose of the medication. It’s used for a short burst of this strong anti-inflammatory; even for things like bee-stings and poison ivy reactions, as well as bone and joint conditions. They’re the strongest anti-inflammatory available to mankind. And they can also be injected; in a joint for a site-specific effect, or in a muscle for a more systemic effect.  We should have a healthy level of fear of this medication, simply because of its potential for side effects when we take it long term. But it has a very good and important place in the treatment of musculoskeletal disorders.

NSAIDS are a specific form of anti-inflammatory which, as the name implies, do not work the same way steroids do and are not related to them. They include over-the-counter NSAIDs like aspirin, Aleve and Advil, as well as prescription NSAIDs such as Celebrex, Mobic and Relafen.

Narcotics are…well…narcotics and many people think that because they’re prescription, they’re not the same as street drugs. But they are. They are derived from opium or its synthetic counterpart. They’re every bit as addictive as street drugs and might be just as dangerous because many people become addicted unintentionally, while trying to recover from some painful disease, injury or surgery. They think that because they’re prescribed, they must be okay.

All drugs are toxins in their own way, and all drugs are to some extent, necessary in their own way too. Since I don’t prescribe many medications which are needed to save lives, then I have the luxury of saying that most of the drugs I prescribe are taken electively. That means they are not necessary for survival. So then…we can have a conversation regarding the need to take these drugs…or not to.

And now we can also have a conversation about keeping kids away from drugs, both legal and illegal. Because I think that one of the factors which might eventually lead a child to consider taking street drugs is simply a comfort with taking drugs. Of course it’s not the only thing, but it might be a factor.

In general I would tell anyone not to take a bunch of medications unless you must take them to survive. Pain pills are medications you take electively.  So if you have an ache, try to wait it out before taking medications. If you injure something, put ice on it and see how much pain you can take. Try to have peace with pain, rather than seeking immediate relief through the use of pills. Just as they say that kids of alcoholics often drink or kids of smokers often smoke, I would say that kids of elective drug users (legal or otherwise) might be inclined to take drugs as well. They will develop a comfort around drugs and an ease with their use.  So don’t let your kids see you taking medications until they’re older and understand why you take them. And secondly, never routinely offer them pills as a way to relieve their pain. Offer them an ice pack, a warm pack, some TLC…a hug, or a kiss to the boo boo.

Kids and older people actually have a pretty high tolerance to pain. So do animals. Frankly, I think we all have the potential to have high pain tolerance. A tolerance to pain in a natural world, would be a good survival mechanism. I have a horse that had an injury. But for a long time he never showed it. He and I competed and he worked hard without limping. One day it became apparent he was limping ever so slightly. When I had him evaluated and saw what his problem was, I wondered how he kept on working so hard in the face of such an obviously painful condition. Why didn’t he just say “no more” by limping a little earlier?  If I go back to my Caveman Theory, I can answer this question. In his mind, if he limps, he shows weakness. Weakness means a predator singles him out for the kill. My horse doesn’t know he lives in a protected environment. He probably always thinks a predator’s waiting out there to get him.

Over the millennia we have gradually lost our tolerance to pain because there are no predators and there are drugs and alcohol.

Pain is your body’s way of telling you something is wrong. A pain pill cannot stop the source of the pain. It simply dulls your perception of it. Now an anti-inflammatory can decrease inflammation and thereby help with the pain. But in the case of injuries, it is the broken bone or torn ligament which cause the pain and not so much the inflammation. You can’t fix the bone with a pill. You can only dull your perception of it. Often rest, elevation and ice can do just as much.

And taking a pain pill in order to work or play or shop is foolhardy. If you take a pain pill, you should then take the time to rest. The pill is trying to dull your mind to the pain… so if you’re going to bother to take one, then go ahead and let it dull your mind. Don’t go off to work, don’t drive or go off to school after taking a pain pill! It’s a sure-fire way to become dependent on narcotics. You eventually require them in order to work!

A narcotic prescription will guide the patient regarding the use of the medication. It might say to take one to two every six to eight hours, as needed for pain. That doesn’t mean take two every six hours because you have pain. When we write these prescriptions, we’re relying on the patient or their parents to make wise decisions regarding its use. We’re thinking that if you don’t need one for 16 hours, you won’t take one. And studies show that of the people who use narcotics regularly, one in five will become dependent!

And eventually they will be exposed to narcotic pain pills. They might be exposed to them when they are six or eighteen or twenty-seven, but they will be exposed to them eventually. And if you just consider the huge problem with narcotic use we have in the U.S., then you know that many of them will become addicted to these substances. Sure there are some kids who might just be unfortunate enough to have some inherited biochemical or psychological dependency issue, but I see apparently normal individuals slip down the slope to dependency right before my eyes. They’re five weeks out from a minor injury and I discover they are still taking narcotic pain pills on a regular basis. And they’re asking for more. Maybe they even got some from another doc, or their friend or spouse.

And when I suggest that they consider stopping the medications, or taking something like Tylenol, they get agitated or angry and claim they can’t sleep without them or they can’t work without them. They’re becoming dependent! I have to begin a process of counseling and cajoling them to get them to quit. Sometimes I even have to begin a process of tapering their dose so they don’t go into some form of withdrawal. They’re not bad people. They’re not selling the drugs. They have just become dependent on narcotics because they weren’t paying attention and they figured a pain pill was what you took when you had any degree of pain. They have pain…they need pain pills. And because of the way pain pills work on your brain…this behavior can result in dependency even in the most stalwart of us.

It’s a huge national problem. Doctors are tied up in it because we’re the ones who prescribe pain pills. They’re legal! Patients have pain, and we want to help!

We also get waylaid by patients who are selling drugs. They go from doctor to doctor, ER to ER, trying to seek doctors who will prescribe pain pills to them for injuries which we can’t deny; like back pain or sprains. We can’t see it on an x-ray or a test, but we basically have to trust that they are telling the truth. I hate to admit it, but I’ve been duped a few times. I might prescribe pain pills to someone for an ankle sprain and get a call from the pharmacy later that day. The patient just filled the same script from another doctor the day before.  With street sales of prescription narcotics bringing such a high premium, it’s worth the $10-$30 copay to see a doctor and pretend they’re injured.

So start your kids out early. Don’t give them pills unless something is broken or severely injured. Once a day or two has gone by, stop the pills. Avoid narcotics. Just because you might use them for pain, doesn’t mean your kids need them. Ofttimes Tylenol suffices…even for broken bones!

Keep lots of gel packs and ice massage cups in the freezer. Here are some recipes.

Fill one of the Ziploc bags with the water and the rubbing alcohol. Zip the bag nearly all the way closed and squeeze as much of the air out as possible. Then zip it closed. Put it inside another bag. Squeeze the air out of that one too. Put it in the freezer. I usually make several of these at a time, putting a paper towel in between each one and stacking them in the freezer.

The alcohol lowers the freezing temperature and makes mushy ice rather than a hard block of ice. It takes a full day for these to “set up” but you can reuse them several times. After a while they start leaking and you have to put the mixture into new bags.

I always keep several of these handy for bumps and sprains.

And remember…NEVER APPLY THEM DIRECTLY TO YOUR SKIN. Put a towel in between!

Fill each Styrofoam cup almost to the top with water. You have to leave a little space because when the water freezes, it expands. If you’ve filled the cup with water it will overflow when it freezes. Then put them in the freezer and freeze!

Once they’re solid you can peel the Styrofoam down so that the ice is exposed but the cup remains in place to protect your fingers, kind of like a snow cone. Then massage the injured or swollen area for 2-3 minutes. The first minute might be a little intense, but after a while the area gets numb and you can massage away.

Important note: This is the one time you can apply ice directly to your skin, because you’re only doing it for a short period of time and because you are moving the ice, so it is not likely to burn your skin.

Ice massage is even good for rashes and pimples, and just about anything that hurts.